There was no one like Leonard, even Leonard himself. Leonard was gracious and generous and beautifully well-spoken and -dressed; he was also reclusive and agoraphobic and capable of saying virtually anything,or nothing at all. He reveled in attention, and hated it. He loved conversation and adored people, then lived far out in the country (in two countries, in fact) where he saw very few of them. He was politically active for years, and hated politics. He worked like a dog for some 30 years, illustrating many hundreds of books and writing many more; then he simply stopped far before what one could call retirement, and spent about 25 or 30 more years not working much more than a stitch.

To me he was the most wonderful friend and inspiration, nurturing my writing more unfailingly than any person on the earth; yet when I told him I’d dedicated my fi rst book to him, he immediately started complaining about the whole idea of “dedicating books,” sheer nonsense and tripe it was, absurd and ridiculous and he strode out of the room muttering these imprecations, as if muttering could ward off the embarrassment of love. 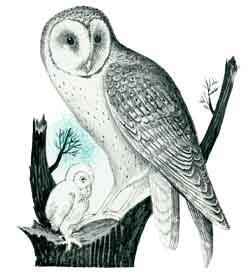 Whose Little Bird Am I?
By Leonard Weisgard

The truth was that you simply never knew what he was going to say or do. He had no problems saying exactly what he meant — and he tended to change his mind — and sometimes he even said things just to hear how they sounded, so that even he didn’t believe them. He was the perfect will o- the wisp, never easy to characterize or pin down. He did everything quickly — walk and write letters and paint pictures and read books – hell, he even cooked quickly — and his mind spun faster than anyone else’s … yet he was capable of just sitting in silence for tremendous amounts of time. He had the tendency to arrive phenomenally early for all occasions once we invited him for lunch, and he showed up at 9:30, and this is no exaggeration, Leonard himself was the exaggeration. By the same token, though, he would also leave just as early: Abby (his oldest child, of course) had an enormous dinner for her 40th birthday party; Leonard made a superb and emotional speech… and then left well before the main course. There was just no one like Leonard.

But at the same time… there was no one like Leonard. He was deeply passionate about a million things. He loved his family and his friends and Denmark and the Danes, and language and food and beauty in every possible guise. He would have been a good God, for the universe he created all around him was one of extraordinary beauty; poetry, in fact. He adored art and culture, and practiced them both. He was a wonderful artist and supremely cultured. Leonard loved painting and dance and literature, and devoured them all. The objects he made or bought were stunning, and the words he used to describe life fl owed like a swift river through a picturesque stone village where there are roses climbing every cottage. When you talked to Leonard, you suddenly fell madly in love with the world, and saw it differently, because he loved it too, and he saw it like no one else. And he painted differently than other people had, invented new techniques, and decorated the interior landscape of children’s minds like no one else ever has. For me, of course, all of that – the vast collection of his remarkable achievements — was secondary to his presence. The comfort and joy of Leonard. For I’ve never had a better friend. There was no one like Leonard. 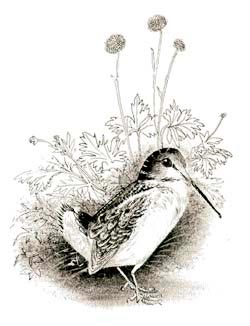 The Little Woodcock
By Bernice Freschet
Illustrated by Leonard Weisgard