“You’ve done it!” began Leonard Weisgard’s characteristically warm and encouraging letter to me, written in the spring of 1992 soon after he’d read my just published biography of Margaret Wise Brown. During the ten years I spent writing my book, Leonard had done everything possible to help. He had welcomed me to Denmark and allowed me to interview him for days on end. He and his wife Phyllis had both made it clear that no question was off-limits. In advance of my arrival, he had prepared pages of notes as memory prompts and had taken out a stack of old letters and manuscripts. One day Leonard showed me the inscribed paper-thin platinum pocket watch that Margaret, extravagant as always, had given him on winning the Caldecott Medal for their book The Little Island. Each evening, I wrote down everything that had been said that day in my notebook. After 11 days, I had a novella’s worth of stories.

My one disappointment was that Leonard had no photographs. (I later realized that—notwithstanding her film-star good looks–Margaret Wise Brown was intensely self-conscious about her appearance and for that reason rarely allowed herself to be photographed.) But Leonard did recall the name of one photographer who had done a publicity photo shoot in Maine. Squinting as he searched his excellent memory, he produced the name like one more rabbit from his magician’s hat. “Kanaga,” he said. “K-A-N-A-G-A.” He spelled the name for me and I jotted it down.

Back in New York, I called the photography curator at the New York Public Library and the curator at George Eastman House in Rochester, New York. When neither of these experts recognized the name, I put the search aside for others on the long list I carried around with me in those days. Then early one Sunday morning about two years later, while window-shopping at a Greenwich Village bookstore, an art book suddenly caught my eye. The title was Recollections: Ten Women of Photography, and among the photographers listed on the cover was Consuelo Kanaga.

Later that morning when the shop opened and I finally had the book in hand, I learned that Kanaga was dead but that her husband, a painter named Wallace Putnam, lived just north of the city. Days later I was on a commuter train to meet Wally, a lanky bearded man in his seventies, who greeted me at the station and proceeded to regale me with stories about “Brownie,” who had contacted his wife because of her reputation both as studio portrait photographer and as a photographer known for lyrical depictions of children. Margaret did not have a good headshot of herself, and in 1945, as her career skyrocketed in tandem with the baby boom, she needed one.

When I asked what had happened to his wife’s work, Wally’s answer sounded like good news. He had given it all to the Brooklyn Museum. Researching photographs at a museum, I thought, was sure to go smoothly. But in the Brooklyn Museum’s study room I was unceremoniously handed two shoeboxes jammed with soiled and unsorted negatives—hundreds and hundreds in all—shown a seat, and told to look all I wanted. It was an appalling situation, but I was not going to be deterred. One by one, I held the negatives up to the light and after hours of frustrated squinting and staring I found, in the very last batch, 17 negatives from the Maine photo shoot. One of the photos was in fact quite familiar: it was the portrait of Margaret reprinted without attribution for decades on the jackets of Goodnight Moon and The Runaway Bunny. The 16 other photos, however, were new to me and nearly all unpublished–a truly remarkable find. At my urging, the Brooklyn Museum cleaned and catalogued the negatives, and Harper began to credit Consuelo Kanaga on book flaps. The photograph of Margaret on the cover of my biography is my favorite. 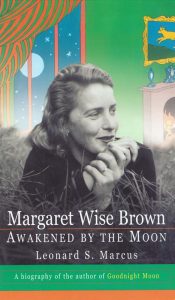 “More than a finely etched, honest portrait of an artist, Margaret Wise Brown is an exciting, fast-paced glimpse into the very beginnings of the golden age of children’s book publishing in America. Leonard Marcus has restored Brown to her rightful place as both pioneer and poet.”
--Maurice Sendak

Leonard is one of the world’s leading writers about children’s books and the people who create them. The author of more than 25 award-winning books, he also reviews books for children and teens for the New York Times Book Review and the Horn Book. Leonard has curated numerous exhibitions, including the New York Public Library’s landmark “The ABC of It: Why Children’s Books Matter”; and, at the Eric Carle Museum of Picture Book Art, where he is also a founding trustee, “Leonard Weisgard: Magician of the Modern.” He teaches at New York University and the School of Visual Arts, and lectures about his work around the world, most recently at the national libraries of China, Singapore, New Zealand, and the US Library of Congress. Leonard’s authoritative biography, Margaret Wise Brown: Awakened by the Moon, is 25 years old this year.