When news of the Caldecott Award for The Little Island first arrived, life couldn’t have been brighter or more exciting. but when I was told a speech had to be prepared for it, life became gloomier and gloomier.

Speeches terrify me; right here and now I expect to disintegrate into a puddle of fear, wetness and bewilderment. Pearl Primus, the dancer was once a guest of a school in Harlem. She came and danced her message to the beat of drums and in a very exciting costume. A week later I was the guest of the same school. The children couldn’t have been more disappointed. There I was fully clothed and hiding behind large sheets of drawing paper. But then I was able to draw what I had to say.

Now, with mere words how can I properly tell you how grateful I am to children and to librarians everywhere, and to thank you for the Medal? I remember as a child always being told children should be seen and not heard. This advice now seems especially right for illustrators, otherwise I’m sure to flounder in a sea of words and misery way above my head. If I don’t follow it, then I know I would have that awful feeling of suddenly remembering all the things I could have said at this important time, and hate myself for not having said them.

Although it seems to me especially as an illustrator, that through the years all the things that should be said and felt about books and children, have been said – sometimes with the impressiveness of thunder, and sometimes with the eloquence of silence.

Perhaps now is the time to say these things over again, as simply and directly as any of us can. Perhaps too much has already been said, maybe not enough. Perhaps this is the time to say “Thank you”, quickly retire, try to do better and say no more. But would I dare stop here?

I wonder if I should tell you about a childhood that wasn’t always strawberries and cream, and that would make you remember your own laughter and pain of growing up? I wonder if I should try to amuse you with adventure and romance that would make you and myself wonder what next? I wonder if we should think of the world as we make it, or wish it were better so that we could all sit back, marvel at it and at little children looking at us, all safe and secure.

We were all of us incredible creatures when we were little. We could see and hear and feel and smell and with easy concentration create things that never were and things that were yet to come.

We can all remember when we originally saw and felt things not yet inhibited by manners or sentiment. Then we were lower to the ground and nearer to detail; then we could create a piece of silver out of some tinfoil down a drain, spot a robin on a water tower and see it become a chimney pot wearing a red hat; make a brown cow out of an old glove; build a city in the folds of a bedsheet; or even transform a doting aunt into a witch!

There was a collection of English nursery rhymes in my childhood that always made me angry. It was all so quiet and polite, the children and the world in it were so pale and washed out. Peter Newell’s books were always full of fun and calamity that wasn’t too disasterous. And I must confess, the fairy tales that had no pictures always meant that I could create my own.

Books at school were upsetting to me. Those frightening black and blue worlds, where everything was outlined in black and indiscriminately filled in with one color. There were blue cows and blue pigs and blue chickens and blue barns and blue people beneath a sky filled with blue sunshine and blue trees on blue grass. On the next page the world would suddenly have turned orange. An orange child in an orange world carrying an orange basket filled with orange juice, up an orange hill under an orange sky.

Fortunately children looking at books, or children drawing, singing, watching or just listening, seem to catch instinctively those details which are most important to them. They focus without being hampered by superficialities. And with this faculty of perception, children are closer to the primitive and nearer to significant detail. Children are never as disturbed as grown-ups by contemporary arts, a streamlined plane, or a gallery of modern painting. They see an image with real meaning and vitality and sometimes with incongrous humor giving it a sharper reality.

I remember the crazy pleasure of standing in puddles, and that great desire to animate all dead things. I remember in the summer heat, blowing on flies and expecting them to believe winter had returned. I remember that disturbing feeling, believing grown-ups could see my thoughts.

These first experiences which we so intensely felt had sometimes real meaning. And when the meaning was too deep to explain, this would then become our magic. As we grow older and taller we do seem to forget this magic and some of our original truths. Most creation that withstands the destruction of time and man, seems to have a common unity of simplicity and belief. Ways of life, religions, myths, folk art, poetry, music, farmer’s tools, chairs and tables and what’s upon them, children wherever they are on earth, — all have for me a strong relationship, especially in their primitive manifestations.

Our adult reality is a world of precarious balance, with knives and forks, and some fingers still in use, with all the ingenious complexity of today’s machinery and some still carrying burdens, with men and women who have split the atom and released stores of energy, and with those who still wait for rabbit’s foot luck and misfortune to rain from umbrellas open in the house.

We are all of us similar creatures drawn to different things. Some like it hot and some like it cold. Some are fond of the primitive and some prefer the modern. And there are those of us who like it both hot and cold. But those original realists, the children, a part of primitive mysteries, are for me the most exciting examples of that curious balance that turns the world, like the machinery of a watch, the parts of a flower, architecture and design, even the love and hate of man.

All these manifestations are more impressive for their component parts working together to make a unit, still each part having its own importance. One thing built upon another to give life form. Drawings on cave walls from the beginning of time caught the simple reality of primeval life because of an intense closeness to nature. The first stories of man everywhere in the world grew out of that ability to see and hear and feel with the simple intensity of children.

There are times in illustrating when the artist of today must rub his nose against the reality of things and try to catch with the honesty of a child a yellow sun like a pat of butter in the sky, with clouds of cottage cheese and the smoke of boats flying in all directions, with no concern for north or east. Houses with windows gaping and people like raisins on the street, a fire engine tearing off the page and a policeman stopping everything.

We experimented with color for sound and shapes for emotion, letting the child bring the magic of movement, in a series of Noisy books. So that a radiator would be placed in a shape suggested by the hissing noise it makes, and the round sound of a ticking clock would put it into a circle.

Audubon, for me, is a fine example of a more formal approach to illustrating. In one of his pictures, a “White Bellied Booby”, somewhat resembling a penguin, sits on a stump with a view of his natural habitat telescoped beneath his legs. Because of a sense of drama with a slight distortion of detail this illustration is more effective, and the Booby still has every feather in place. To what degree illustration should carry this ambiguity is perhaps a matter of age level and the kind of writing to be illustrated.

Some reliable source quotes “The success of an illustration lies in the instinctive transference of an idea from one medium to another. And the more spontaneous it be and the less labored in application, the better.”

This is no place for me to start floundering in words nor to recite the history of illustration nor to tell you how printing methods and the economies of the times have influenced illustration, nor to describe its limitations.

This is not the time to tell you of the comic books of the past which also caught a directness of action and a luridness of detail. And I wonder if I can tell you what my own work with books has taught me?

How can I start to explain that I don’t see black separated from the realm of color ? Nor objects in terms of outlines? How can I describe my reactions to the shades of night?

I can’t tell you in the language of the fish from the Little Island, how all the land is one land under the sea. Perhaps I can try to explain how pictures for The Little Island and Golden MacDonald’s text grew right up out of the water. This is a real little island off the coast of Maine belonging to a group of other little islands called Vinalhaven.

I saw this island grow tall and squat as the tides rose and fell. I’ve watched the mists blow in and hide the little island, sometimes leaving only the pine tree tops exposed, hanging in space. I rowed to and from the little island with the seals spawning below the surface of the water. I’ve seen the sun rise and make a golden island for just five seconds in an early morning sea.

Everything is fast and fleeting around the little island; the sea is never still, the clouds fly quickly into different shapes, the colors change from sunlight to mistlight, the trees are moving and the birds are always flying and screaming.

This active little island was too elusive for me to catch in its own time. It was easier to put as much of it as I could wherever it is you store such things, take it home to Connecticut, and remember it all in my own time.

And after all this I don’t believe I could really tell you of illustrating or bookmaking, certainly not of the poetry of living and dying, nor of little children.

You already know it. You know it in your own lives, you know it in what is written, in what you see and hear and feel and with children all around you.

The Little Island By Golden MacDonald Illustrated by Leonard Weisgard 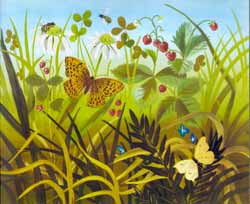 And wild strawberries turned red.
Summer had come to the little Island." 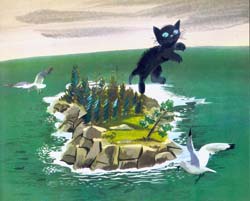 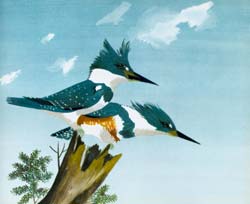 "And the kingfishers came from the South
to build nests in the trees." 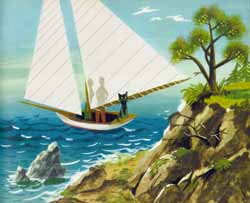 "What a little land," said the kitten.
"This little Island is as little
as Big is Big." 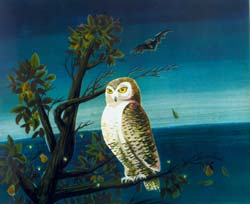 "Night came to the little Island
dark and still
And seven little fireflies
flashed in the darkness.
A bat flew
around and around the pear tree
and woke up the owl.
The wind whistled." 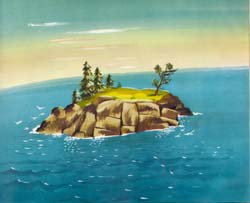 "And it was good to be a little Island.
A part of the world
and a world of its own
all surrounded by the bright blue sea."

The Little Island
By Golden MacDonald
Illustrated by Leonard Weisgard